Growing up most of us were taught to believe journalists try to as factual and impartial as possible. We understand journalists are human, and like everyone, they have their own personal biases, but they make an effort to try and keep those biases out of their news coverage. Somewhere along the way mainstream media journalists stopped trying to be impartial, and let their own feelings manipulate their coverage of the news, sometimes in extremely deceptive ways. Journalists at the Washington Post will tell you it' their job to be activist journalists

, it’s seems the era of impartial news coverage is becoming a thing of the past.

When you talk about deceptive coverage of hurricanes, the pictures below of Anderson Cooper intentionally standing in a ditch to make the flooding seem worse than it was, are probably the most well known examples of this.

When this footage aired the camera only showed Anderson Cooper and another correspondent standing in waist deep water, leading the viewer to believe the flooding was much worse than it was. These photos are from Hurricane Ike in 2008, however they didn’t gain notoriety until Hurricane Florence in 2018. Left leaning news sites hit back saying these were 'old photos'

because they were 10 years old. If you ask us, learning the Anderson Cooper is lying is the important part, not that he did it 10 years ago.

CNN may be the leader in Fake News, but they are hardly the only ones doing it. This video shows The Weather Channel Jim Cantore in Louisiana for Hurricane ida in 2021, he’s bent down and we’re supposed to believe the winds are so strong he can’t stand up normally, and then two random people stroll into the shot casually eating ice cream cones, it’s pretty funny.


You may be thinking, that’s just weird coincidence there’s no way a network like The Weather Channel would engage in these deceptive practices, and you’d be wrong. Here’s a video of Mike Sideal of the Weather Channel struggling to stand up in Hurricane Florence in 2018, and then two people take a leisurely stroll in the background.

Maybe you’re thinking to yourself those fake Weather Channel incidents are just small indiscretions, there’s no way they would do that on a regular basis, you’d be wrong again. Here’s The Weather Channel’s Jim Cantore in Hurricane Ida being battered by high winds and rain struggling to stand up, and then a random person casually walks in front of the camera. Hey Weather Channel you literally have one job, to accurately report the weather and you can’t even be trusted to do that.

The Weather Channel’s coverage of Hurricane Ida is bounty of fake news coverage, here’s Jim Cantore again, everything is going great Jim is totally selling the winds are too intense to stand up in, then in the last few seconds a random man does a cartwheel getting into his truck. If the winds were too strong for Jim Cantore to stand up in how does that guy pull off a cartwheel.

This next video comes from the The Today Show a major morning news program, it features a reporter in a canoe, and the readers are supposed to assume the flooding from Tropical Storm Irene which hit New Jersey in 2011 is so deep she can’t even stand in it, then two men stroll by revealing the water is about 6″ deep.

These photos and videos are kinda funny, but they highlight a big problem in society, if the people we entrust to give us information about what’s going on in the world are going to intentionally lie to us about the weather, what else are they lying about? If they want you to think the water is too deep to stand in, but it’s really only 6″ deep, how can you trust anything they say. See more examples of deceptive news coverage in our 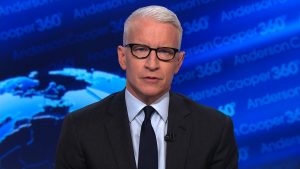 EDITORS NOTE: In this article we looked at some flagrant examples of how the media lies about the severity of hurricanes, to push the climate change agenda. Unfortunately sometimes hurricanes do strike the places where people live, creating terrible destruction, and taking lives. If your house is flooded by a hurricane, it’s going to take years for your life to return to normal. Flood insurance helps, but it’s not going to cover everything, and you are going to have some major out of pocket expenses. Having a hurricane damage your house is no joke.