The Intergovernmental Panel on Climate Change (IPCC) is a group of “climate change scientists” formed by the United Nations to provide governments, lawmakers and policy advisors with “unbiased” scientific information about climate change. The irony is multiple members of the IPCC have made public statements about putting agenda before science (see 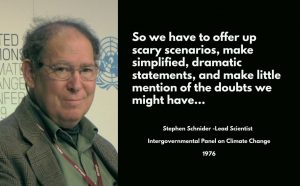 (CLICK TO ENLARGE)
Whether you believe climate change is real or not comes down to one question, do you believe scientists would lie to advance an agenda? In 1976 Stephen Schneider the lead scientist of the Intergovernmental Panel on Climate Change said

"On the one hand, as scientists we are ethically bound to the scientific method, on the other hand, we are not just scientists, but human beings as well. And like most people, we'd like to see the world a better place, which in this context translates into our working to reduce the risk of potentially disastrous climatic change. To do that, we need to get some broad-based support, to capture the public's imagination. That, of course, entails getting loads of media coverage. So we have to offer up scary scenarios, make simplified, dramatic statements, and make little mention of the doubts we might have. Each of us has to decide what the right balance is between being effective and being honest..."

Read more in our article Would Scientists Lie To Advance The Climate Change Agenda. Stephen Schneider and 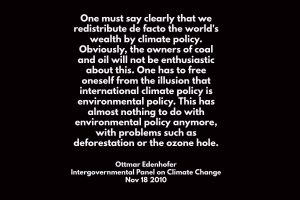 (CLICK TO ENLARGE)
One of the strongest critcisms of the climate change agenda, is it' really not about solving climate problems, it' about political and social agendas. In 2010 Ottmar Edenhofer of the IPCC said:

"But one must say clearly that we redistribute de facto the world's wealth by climate policy. Obviously, the owners of coal and oil will not be enthusiastic about this. One has to free oneself from the illusion that international climate policy is environmental policy. This has almost nothing to do with environmental policy anymore, with problems such as deforestation or the ozone hole..." 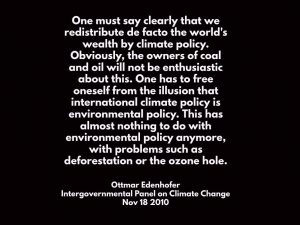