The Maldives is an island nation located in Indian Ocean, about 430 miles south of the tip of India. The region is made up of 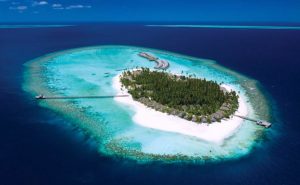 (CLICK TO ENLARGE)
An Atoll is an island or group of islands that is nearly or completely surrounded by a ring of coral. In an arial photograph the coral will appear as lighter blue or turquoise band encircling one or more islands.26 atolls , with over 1,000 individual islands, only 200 of the islands are inhabited. The island chain is spread out over a 115 square miles (about half the size of Manhattan). The capital of The Maldives is Male, and is located on Male Atoll, also known as King Island. 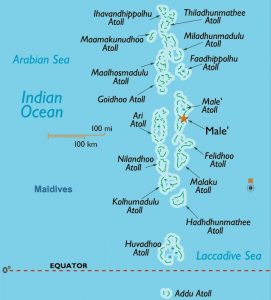 The main reason the Maldives is frequently mentioned in "Scientists" and "Climate Change Experts" have been making doomsday predictions since the 1850's. We've organized a collection of the earliest, most dramatic,and noteworthy ones. See Climate Change Predictionsclimate change predictions is it’s an extremely low lying area. Average height on the island is just over 4 feet above sea level. The highest natural elevation is only 17 feet above sea level. The modern construction on the island is artificially raised. Sea level is a complicated science subject, we discuss it in greater detail in our article, Sea level and the tides is a complicated dynamic system that influenced by many factors including position of the sun, position of the moon, time of year, time of day, and geologic pressure. Read more on our full article A Simplified Explanation of Sea Level and the Tides.Understanding The Basics About Sea Level.

In this article we’re going to look at the population, construction, tourism and economic facts about The Maldives.

Population Data For The Maldives

In the 1960’s when global population data was starting to be collected, the population of The Maldives was aproximately 90,000 people

. In 2020 the population was approximately 560,000 people. In 60 years the population has grown over 600%. If there is any truth to the predictions that rising sea levels are flooding over the Maldives and making them uninhabitable shouldn’t the population be decreasing, or at least plateauing? If you look at the chart below for the population of the Maldives you can see it curving high and to the right. 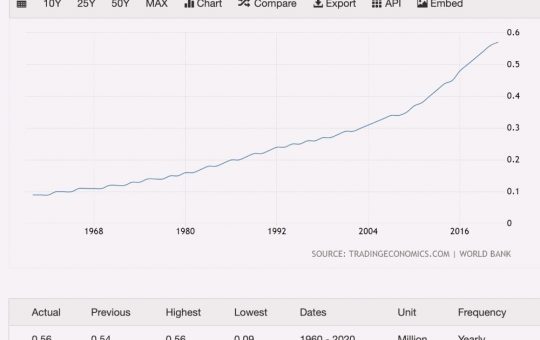 At a certain point they will run out of livable land to build on, and population growth will stop, but looking at the population growth of the island today, there is no evidence that supports the predictions of it becoming uninhabitable.(Return to Top)

Economic Data For The Maldives

Next lets take a look at the Gross Domestic Product or GDP growth of the Maldives. A simple definition of GDP is the value of goods and services a country is producing. A GDP that is trending up indicates a strong economy that is growing, a GDP that is trending down indicates a weakening economy that is contracting. In 1986 the Maldives had a GDP of approximately 160 million. In 2019 the Maldives had a GDP of 5.63 billion, in 40 years they had a GDP growth of 3500%. If the island was in danger of flooding over and being lost due to rising sea levels, why is the economy growing? 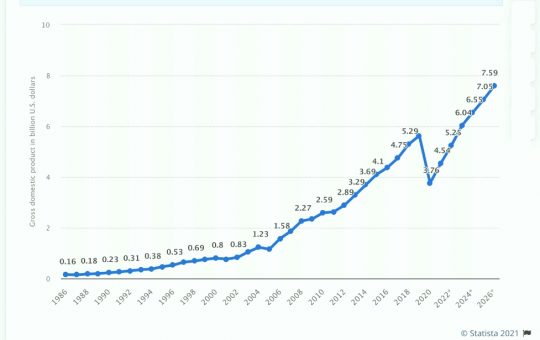 If you look at the chart you will see a decline in GDP for 2020 and 2021, is this evidence the predictions about the Maldives are coming true, not at all. In early 2020 the Covid-19 hysteria took hold worldwide, and most countries halted international travel and forced their citizens into “lockdown” or imposed “essential travel only” restrictions. From March 2020 through July 2020 the Maldives closed it's borders completely

. When you are an island nation where international tourism is driving force in your economy, closing the borders is going to drive down GDP. Even though they re-opened in July of 2020, most airlines and other countries still had strong restrictions on international travel, and a vacation to the Maldives was never going to qualify as “essential travel”. As we entered 2021 international travel started to comeback, but didn’t reach previous levels. If you look at the chart above you can see the trend of growth has started to return. More importantly, the economic projections continue to show growth. If there was any truth to the predictions of sea level rising, wouldn’t the economic projections reflect that? The economic facts of the Maldives do not support the hysterical climate change alarmism.(Return to Top)

Tourism Data For The Maldives

Next we’re going to take a look at the industry the Maldives is best known for, tourism. The first hotel in the Maldives was Kumbra Village, and it opened in 1972 with just 60 beds. Today there are over 40,000 hotel beds. According to the Maldives Association for Tourism Industry (MATI) in 2018 almost 1.5 million people visited the Maldives

. They also state the tourism industry is responsible for 30% of government taxes, and 25% of GDP. Simply put Tourism is the big driving engine of the economy of the Maldives. Today there is no shortage of hotel rooms on the Maldives.

There is no denying almost of the hotels, especially the 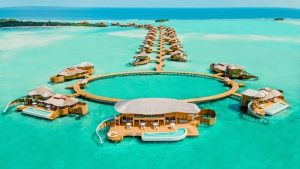 in the Maldives and 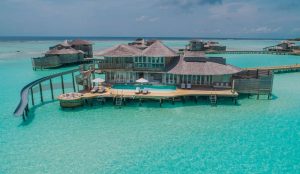 (CLICK TO ENLARGE)
Luxury Villa in the Maldivesluxury villas

on the Maldives, are spectacular.

Hotel occupancy rates peaked in 2004 with an 83% occupancy rate, additional hotel capacity has caused the rates to drop to around 60%. The Maldives probably has enough hotels, new construction is focusing on luxury offerings, and unique guest experiences. If the doomsayers were right about the Maldives becoming uninhabitable, why is the tourism industry so strong? If the Maldives were really in danger of being flooded over why are hotels spending millions of dollars constructing luxury villas out over the water? Wouldn’t they be worried that in a few years these would be useless and be a waste of money? This is yet another example of the provable facts completely disagreeing with the overly dramatic predictions.(Return to Top)

Construction Data For The Maldives

Finally we’re going to take a look at the Maldives Construction industry. Most of the inhabitants live in low lying single or low story residences. However on Male Island, where the Capital City of Male is located, there are a lot multi-story building and some mid range skyscrapers.

The tallest building on the island was built in 2018, and is the 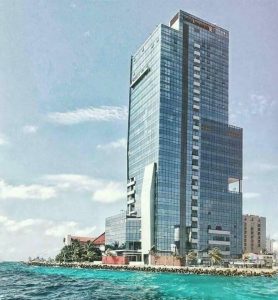 (CLICK TO ENLARGE)
Dharumavantha Hospital is 25 story glass and steel skyscraper located in Male, the capital city of the Maldives. The building is 295 feet tall, and was completed in late 2018.

with 25 floors, and is just under 300 feet tall. The next tallest building was built in 2011 and is named 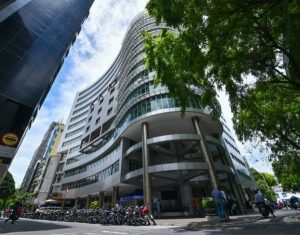 (CLICK TO ENLARGE)
Velaanaage is a 15 story glass and steel skyscraper, located in Male, the capital city of the Maldives. It's over 175 feet tall and construction was completed in 2011. It is a government office building, and is where most of the government and administration offices are located.

, it’s a Government office building with 15 floors over 175 feet tall. The third tallest building was built in 2009, and is the 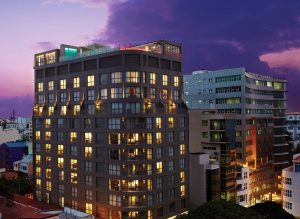 (CLICK TO ENLARGE)
The Traders Hotel/Holiday Inn is a 15 story steel and curtain wall skyscraper. It's just over 175 feet tall, and construction was completed in 2009. It has 117 guest rooms and a rooftop infinity pool. It's located in Male, the capital city of the Maldives.

, with 15 floors. There are currently 8 existing skyscrapers in Male over 10 stories tall

. While Male is a long way from looking like NYC, there is a noteworthy amount of skyscraper construction already there or underway on the island. If the government truly believed the country was going to become uninhabitable why did they build a 24 story hospital in 2018? Why did Holiday Inn build a 15 story hotel? Why did a developer start construction on 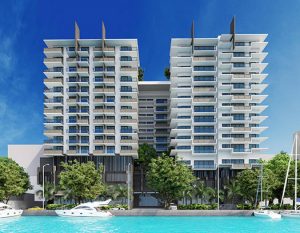 (CLICK TO ENLARGE)
Nasandhura is a 15 story steel and curtain wall skyscraper, located Male, the capital city of the Maldives. This is a multi-use waterfront property, it will have luxury condominium apartments and hotel space. The amenities and services will be shared by permanent residents and hotel guests. This type of multi-use facility is popular in other waterfront locations, like Miami Beach.

, a 15 story luxury condominium/hotel in 2016? If the In 1989 Climate Scientists from the United Nations, made the following doomsday prediction

"A senior U.N. environmental official says entire nations could be wiped off the face of the Earth by rising sea levels if the global warming trend is not reversed by the year 2000. Coastal flooding and crop failures would create an exodus of 'eco-refugees,' threatening political chaos, said Noel Brown, director of the New York office of the U.N. Environment Program, or UNEP. He said governments have a 10-year window of opportunity to solve the greenhouse effect before it goes beyond human control..."

This prediction turned out to be completely incorrect.

In this article we didn’t look what the “experts”, “climate scientists”, “policy makers” or “political activists” claimed was going to happen. Instead, we looked at the provable facts, from different sources, different industries, and provided citation links so you can independently examine the data yourself (we don’t believe people who say “The phrases 'settled science', 'trust the science' and 'scientific consenus' are used to trick you into believing what the 'experts' tell you is 'true'. They want you to accept these statements as unquestionable facts, and not to do your own research. Any time some one tells you something is 'settled science' or there is 'scientific consenus' something is true, there's a good chance they're lying to you . Read more on our full article about Settled Science and Scientific Consensustrust the science” here.) And all of the facts are in agreement, the tourism industry, has been and continues to be, the growing economic driving force on the Maldives. The economic growth shows zero impact from any looming climate change catastrophe, in fact tourism is is growing, and is behind the government improvements in the overall standards of living in the capital city. Urban construction of skyscrapers is continuing, and shows no signs of stopping. It looks like the people making predictions about the future of the Maldives, can’t see past their agendas and look at what’s really happening on the Maldives. If these “scientists” really are “experts” why do their predictions never come true, and why don’t they match what’s going on in the real world? If “scientific consensus” doesn’t agree with any easily provable facts, everyone should probably stop “trusting the science” because it doesn’t look very scientific at all.(Return to Top)