You Are Here:  Home » Articles » A Simplified Explanation of How Sea Level and The Tides Work

The science behind how the tides and sea level works, is pretty complicated, what we aim to do in this article is distill it down to a few core concepts, and provide a “man-on-the-street” explanation. We’ll provide links for people who want to go a little deeper. There is some science content, but we tried to explain it in a way that made it easy for everyone to understand.

One of the most common "Scientists" and "Climate Change Experts" have been making doomsday predictions since the 1850's. We've organized a collection of the earliest, most dramatic,and noteworthy ones. See Climate Change Predictionsclimate change predictions is that warmer temperatures will melt Arctic Ice and raise sea level. What these predictions, gloss over is that sea level is an imaginary reference point. The actual level of the sea, is a complicated dynamic system, with a lot of “moving parts”. Additionally the level of the sea is almost always rising or falling, it doesn’t stay a fixed height for any length of time.

When people talk about rising sea levels they are almost always talking about melting arctic ice. Arctic Ice and icebergs that are already in the ocean, won’t affect sea level if they melt (if you have a glass of ice water it won’t overflow when the ice melts). If large quantities of ice currently on land melt, sea level would rise microscopically as the water is redistributed around the globe, the quantity needed to raise the level significantly, would be extremely massive. You should also know, that snow and ice accumulate naturally, as part of the earth’s normal functioning. This snowpack also melts naturally every year, and eventually runs into the sea. This cycle has been occurring naturally for millions of years before humans were even here, so ice accumulating on land and then melting isn’t new, and it certainly isn’t caused by human activity.

The next important thing you should know is sea level is an imaginary reference point, the actual height of the water is constantly rising and falling, sometimes dramatically. “Sea Level” lies between low tide and high tide. The average difference between high tide and low tide, across the globe, is approximately 2 feet

. In some regions the difference between high tide and low tide is only a few inches, in some places it’s a lot more. Local geographic conditions can also play a role, for example in the Bay of Fundy, Canada 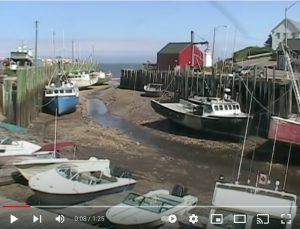 . Another example of this is at 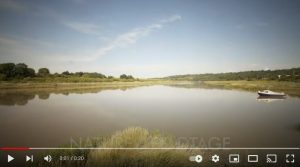 (CLICK TO ENLARGE)
Bristol Channel in England has a tidal change of 49 feet.

which has a tidal difference of 49 feet. High tide occurs every 12 hours and 25 minutes (it’s largely controlled by the moon orbiting the earth). So if high tide is 6 pm tonight, it will be 6:25 AM tomorrow morning, and 6:50 pm tomorrow evening.

WARNING GEOLOGICAL SCIENCE CONTENT AHEAD. Another factor that affects sea level, that scientists are only just starting to understand is geological pressure. The earths surface is made up of gigantic tectonic plates, that are constantly shifting and moving minute amounts. The shifting of these tectonic plates is what causes earthquakes. Underneath these plates is mass of magma, think of it as a sea of extremely hot lava. This magma is exerting great pressure outward, the hotter the magma is the greater the outward pressure, the cooler the magma is the smaller the pressure. This geological pressure also affects sea level, but on a much smaller localized area. When there is a hot pocket of magma exerting more pressure at a location, it will raise the sea level. Scientists recently learned that the coastal flooding in Miami, is largely being caused by A study published in 2017 concluded that the sea level rise in the Miami region was caused by changes in geologic pressure, and not by climate change.

, and not by climate change. In Miami the situation was made worse by coastal erosion, which was also caused by the change in geologic pressure. As this hot pocket of magma slowly moves below the earths crust, it shifts where the pressure affects local sea level. This science here is fairly new, and is something that we are only beginning to understand.

Sea level is a really really complicated dynamic system, and is affected by a lot of factors like the time of day, time of year, position of the sun, position of the moon, and geologic forces. It’s constantly changing, and moving up and down, sometimes more dramatically than others. Claiming that an arctic ice melt is going to catastrophically flood coastal regions, is basically admitting that you really don’t understand how tidal mechanics work at all. The earth is a really really complex system that’s normal operation has dramatic changes in sea level that occur naturally. Claiming that human beings can now disrupt that dynamic system and permanently alter it, in profoundly negative ways, is a perfect example of human beings having an overinflated sense of self-importance, and a profound display of hubris.

Censored Russian Video “How Did I Realize I’m Gay”